Out on the lawless Sea of Thieves, Outposts are the closest thing to civilisation, with any number of traders and tavern-keepers eager to help pirates empty their holds of treasure and kick back with a well-deserved grog.

Small wonder, then, that the unexpected shrouding of Golden Sands Outpost – previously one of the more charming and cheerful ports of call – was a loss felt by many, and proof that The Reaper’s Bones are determined to oust the Trading Companies once and for all.

Now, however, the residents of this Outpost are being rallied by none other than Merrick, last seen menacing Megalodons in previous Adventure ‘The Shrouded Deep’[www.seaofthieves.com]. But he is not unopposed…

A Whale of a Time

Recalling past events may help shed light on Merrick’s motivations. Pirates who answered Larinna’s call in ‘The Shrouded Deep’ would encounter the Killer Whale, a (mostly) faithful recreation of Merrick’s original Galleon. Both he and Belle were aboard, having tried and failed to battle the legendary Shrouded Ghost. Not just for the Commendation, we hasten to add; Belle was racing against Captain Flameheart to recover a long-lost relic from the beast’s belly.

Thanks to Larinna sending reinforcements their way, Merrick and Belle were able to gather four fresh Megalodon souls and arrange them on a ritual table, urging multiple crews to band together as… well, a band. When five pirates joined forces to play ‘Summon the Megalodon’, the resultant racket was enough to call forth the irate Shrouded Ghost, ready for a rematch.

As if the arrival of an ill-tempered behemoth wasn’t enough, Captain Flameheart’s Ghost Ships soon made an appearance, eager to prevent players from laying claim to the Veil of the Ancients – the treasure that’s made the Shrouded Ghost so elusive for all these years.

Just when things seemed about to spiral out of control, the odds were evened by the arrival of the good ship Blackwyche. Helmed as ever by Sir Arthur Pendragon, it was drawn to the fray in the wake of a ritual that, its captain declared, had caused “quite the stir” in the Sea of the Damned.

With the help of this aristocratic ally, Belle, Merrick and embattled pirates alike were able to triumph over the Shrouded Ghost and force Flameheart to retreat. Pendragon retrieved the Veil of the Ancients on Belle’s behalf, though it was soon discovered to be missing the Veil Stones that imbue it with power.

With the Veil delivered to the Pirate Lord for safekeeping (after it’s been thoroughly disinfected, or so we’d hope) it looked as though Merrick’s lifelong ambition had finally been realised. He was free to return to his spot at Stephen’s Spoils and bask in the satisfaction of a job well done – not to mention the world’s largest fish supper. 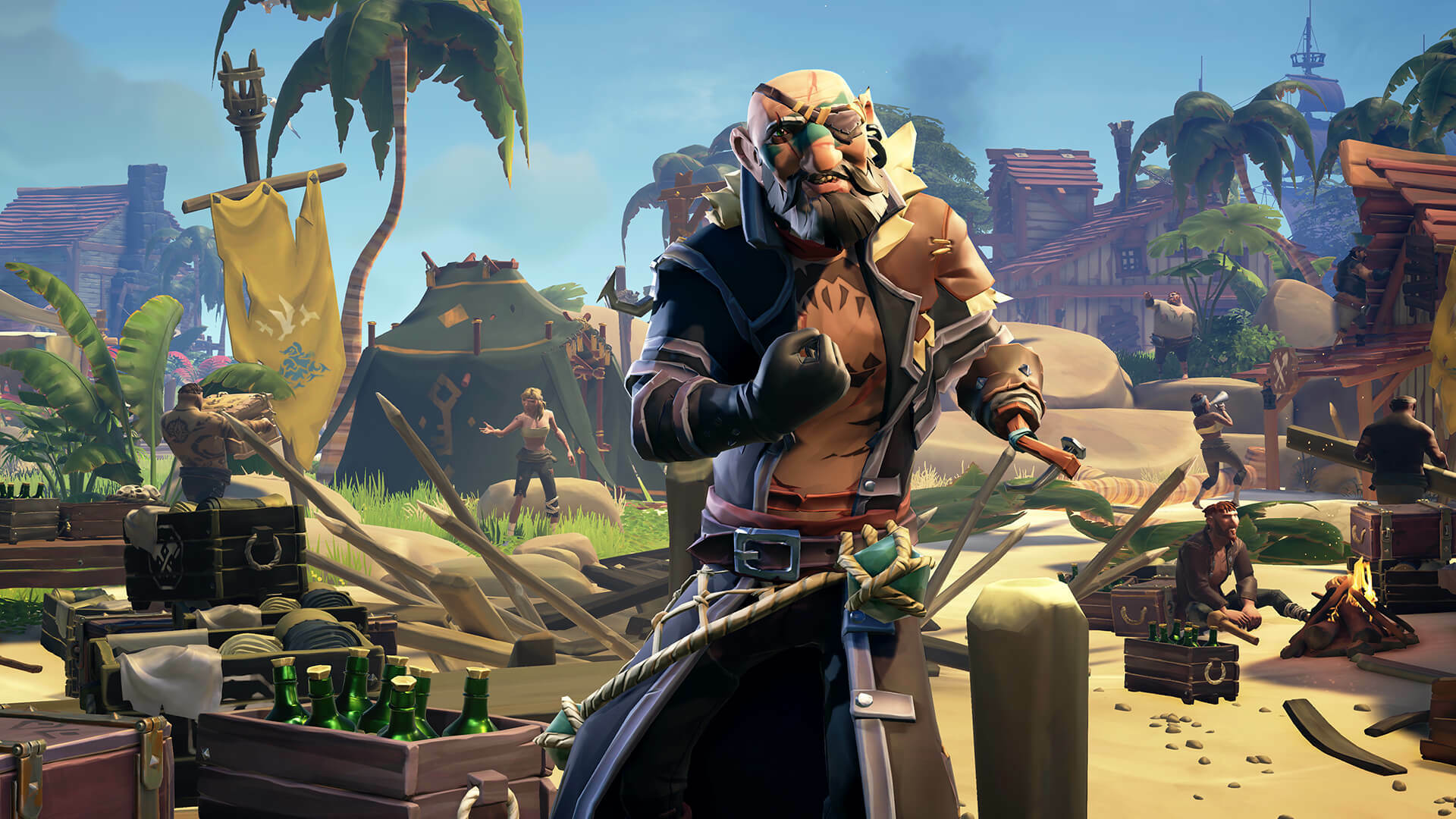 Time spent in Belle’s company, however, has given the wily Hunter plenty of valuable insights into recent difficulties, including a way to finally dispel the fog surrounding Golden Sands. Armed with this information and with his adventurous spirit rekindled, Merrick has a new mission: he’s determined to rally the Outpost’s residents and restore Golden Sands to its former glory.

This lofty goal puts Merrick in direct conflict with the Servant of the Flame and, by extension, the rest of The Reaper’s Bones. The Trading Companies once again prospering at Golden Sands would mean that the Reapers had failed to follow Flameheart’s express orders, and the Servant will stop at nothing to ensure that his father’s wishes are obeyed.

As for the Shrouded Ghost, who knows what strange abilities the creature might still possess after spending so long with the Veil in its belly? Whatever distant shores the Ghost now haunts, pirates should expect its fleeting visits to the Sea of Thieves to be as infrequent as ever, preserving its legendary reputation among crews in the future. 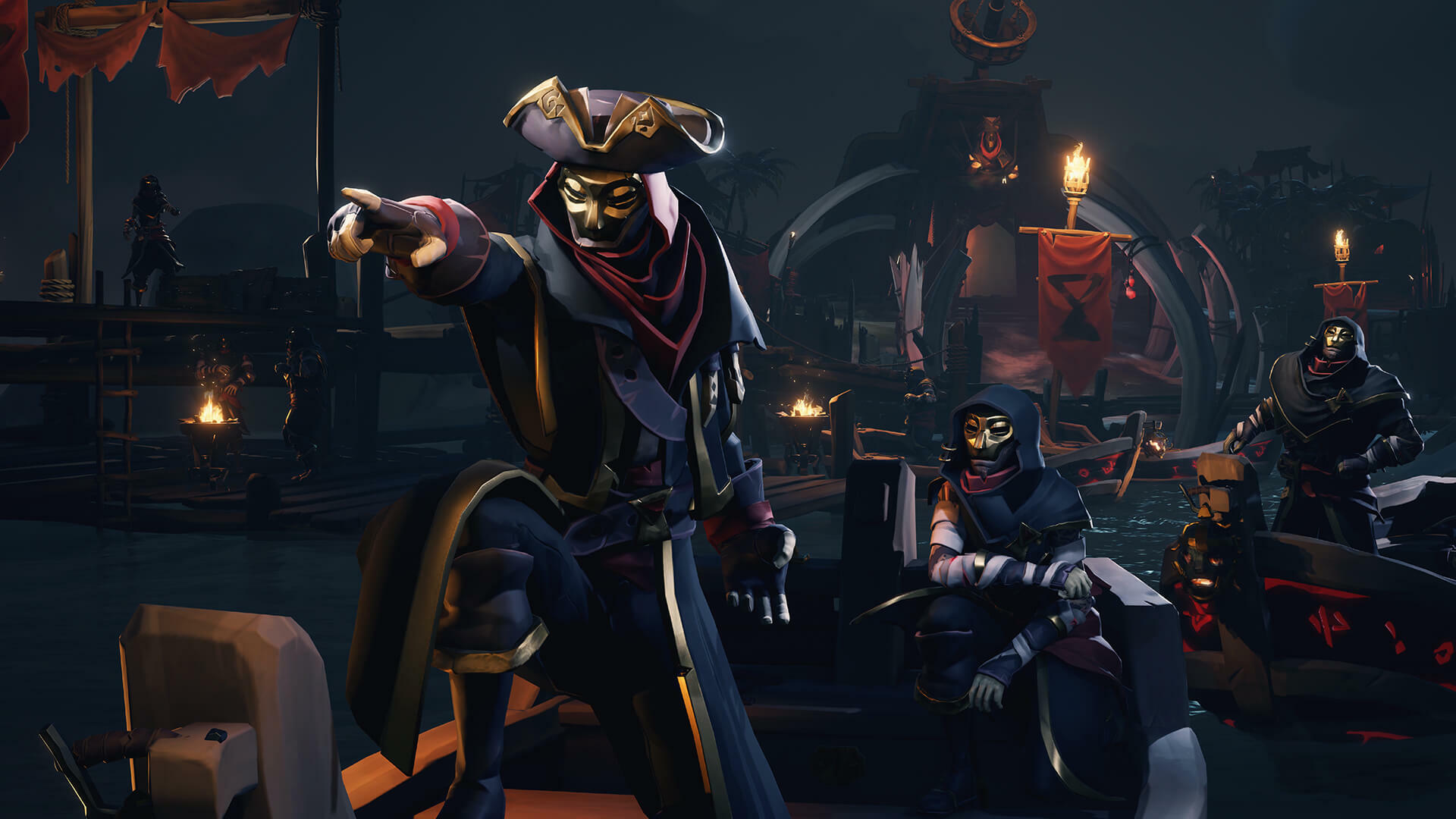 When Lost Sands arrives on May 26th, pirates will be able to help or hinder Merrick’s plans as they see fit, both by actively taking part in the Adventure and seizing other opportunities to tip the scales. Speaking to Larinna to begin the Adventure and then choosing to follow either the Hunter’s Path or Servant’s Path will ensure that your actions contribute to Golden Sands’ resurrection or its ruin.

Even outside the Adventure, Merrick will accept donations of fruit and wood crates to help Golden Sands’ cause, along with cloth, rum bottles and the Reapers’ Relic Caches for safe disposal. Alternatively, players loyal to the Reapers should look for distinctive Soulflame Rowboats. Destroying these near Golden Sands will unleash supernatural energies and fortify the fog, hampering the rebuilding efforts. Sticky-fingered Reapers can also swipe special supplies before they reach Merrick and deliver them to the Servant of the Flame to cause further chaos.

Whichever path you choose, expect Golden Sands to be a lively destination for the duration of ‘Lost Sands’ as both sides seek to exert their will upon the waves. The Adventure will be live until June 9th, and what happens to the Outpost in its wake is entirely up to you…