Black Dahlia’s key Special Move is using her massive gun-arm to launch slow-moving explosive rounds that detonate on contact. These explosive rounds don’t have the fullscreen reach like other zoning tools, so she’s more effective at mid-range where she can approach alongside them using her forward dash and unique “Onslaught” jump.

Onslaught is Dahlia’s unique movement ability that leaps towards the opponent allowing her to attack from the perfect angle. It can be used from the ground and the air, and the distance covered by the ground version adjusts based on how far she is from the opponent.

In future Alpha updates, Black Dahlia’s reload will be enhanced with unique rounds beyond her classic explosive shot. For example, one unique round creates a flaming hazard on the stage to enhance her zoning, while another turns her next shot into a powerful short-range buckshot. Her gun holds six rounds, after which she’ll need to reload.

Her remaining Special Moves will be focused on escaping and tricky movement, and you’ll just have to wait and find out what’s in store for her Blockbusters!

Although exact dates aren’t set in stone yet, per usual we plan on having three major milestones for Dahlia’s release:

Like Umbrella’s release, Steam Season 1 Pass owners will be able to play a “sketchy” version of Dahlia while she’s still early in development. This is a rare chance to get a peek behind the curtain of video game development! You’ll be along for the ride as regular updates will see new moves and mechanics added over time.

To begin with Dahlia will be mostly functionally complete aside from several of her Special Moves and Blockbusters, so you’ll get a feel for her unique movement and ranged attack options right out of the gate. Some of her crazier stuff will start to appear shortly thereafter!

Once Dahlia has her full set of finished animations and voice acting, she will be ready for general gameplay tuning adjustments and she will move into her Early Access Beta. This will involve extensive testing and processing of player feedback, ensuring that Dahlia is the best that she can be before Final Release!

Dahlia’s full release will feature all the bells and whistles of every finished character. She will be fully balanced and feature complete, and will have her finished stage and music, a brand new story mode, character trials, etc.

At this point she will also be made available on other platforms outside of Steam.

HOW TO SELECT BLACK DAHLIA

Characters in their Alpha phase are only available to Season 1 Pass holders. If you don’t own the Season 1 Pass DLC, you won’t be able to use Dahlia until later in the year.

If you don’t own the Season 1 Pass yet you can pick it up here:

WHEN CAN I BUY HER DLC SEPARATELY?

Dahlia’s individual character DLC will only go on sale once her Alpha phase is over and she has moved into Early Access Beta. This will allow you to play Dahlia during her Early Access Beta phase without owning the Season 1 Pass.

WHEN WILL DAHLIA BE AVAILABLE ON EACH PLATFORM?

Dahlia’s Alpha and Early Access Beta are exclusive to Steam.

The Season 1 Pass is currently available on PS4. Dahlia will join Annie and Umbrella later this year alongside her Full Release.

We are excited to finally confirm that we are actively developing Skullgirls 2nd Encore and the Season 1 Pass as an update for the Switch and as a new release for Xbox One & Xbox Series X! Although we can’t confirm a release date at this time, we are currently targeting later this year!

Keep an eye on our social media pages (Twitter, Facebook[www.facebook.com]) for further updates!

Although Dahlia is making her big debut at Combo Breaker 2022, there is still one more DLC character in the Season 1 Pass yet to be revealed…

We initially planned for DLC 4 to release later this year, but we are now projecting an early 2023 release. 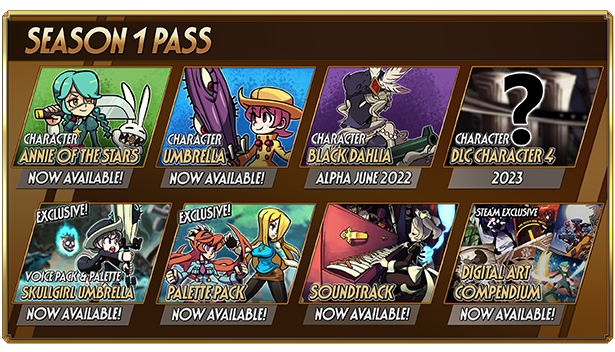 Eager for more news about the 4th DLC Character? If you haven’t heard, Skullgirls is a Main Game at Evo 2022 this year. If you want to be a part of history, you may want to tune into that event… or better yet, register to attend or compete right here: https://smash.gg/evo

Remember – the more registered Skullgirls players there are, the more prominent our positioning will be at the event! If you can make it to Las Vegas this year, please show your support for Skullgirls on our 10th anniversary, and swing by our booth to get tons of free swag and goodies!

Be sure to keep an eye on our social accounts (Twitter, Facebook[www.facebook.com]) for regular animation previews, behind the scenes concept art, and even livestream animation sessions with the amazing artists at Future Club.

We can’t wait to share everything we have in store for Skullgirls in the coming months. Thank you all SO much for your endless support! Here’s to ten more years!

<3
All of us at Hidden Variable, Future Club, and Autumn Games