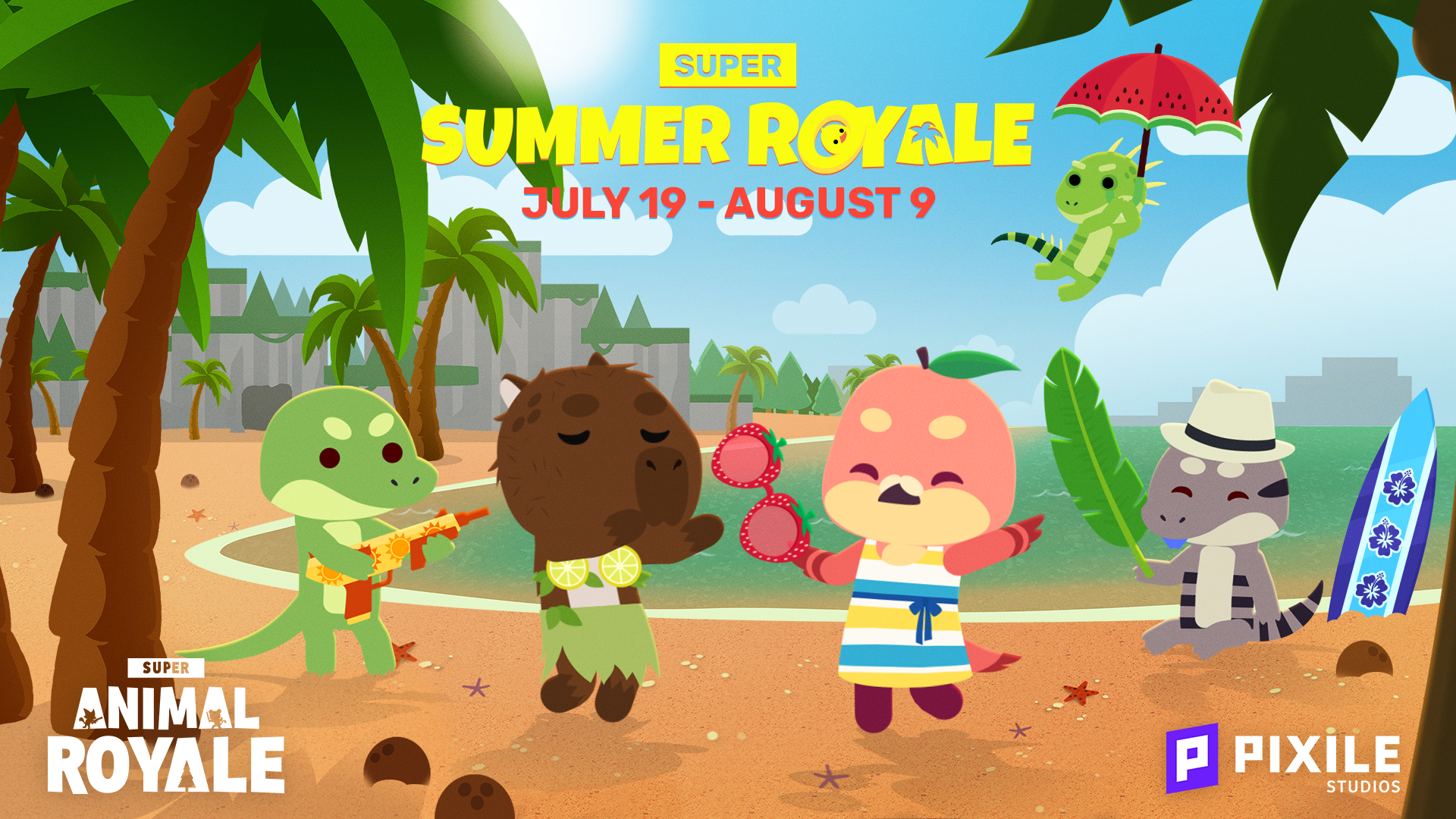 Summer is in full swing! Grab your surfboards, refreshing drinks, and plenty of fruit baskets, because the island will be hosting its yearly Super Summer Royale event once again, bringing with it a wave of new cosmetics – as well as a pair of peachy-keen Super Animal breeds! 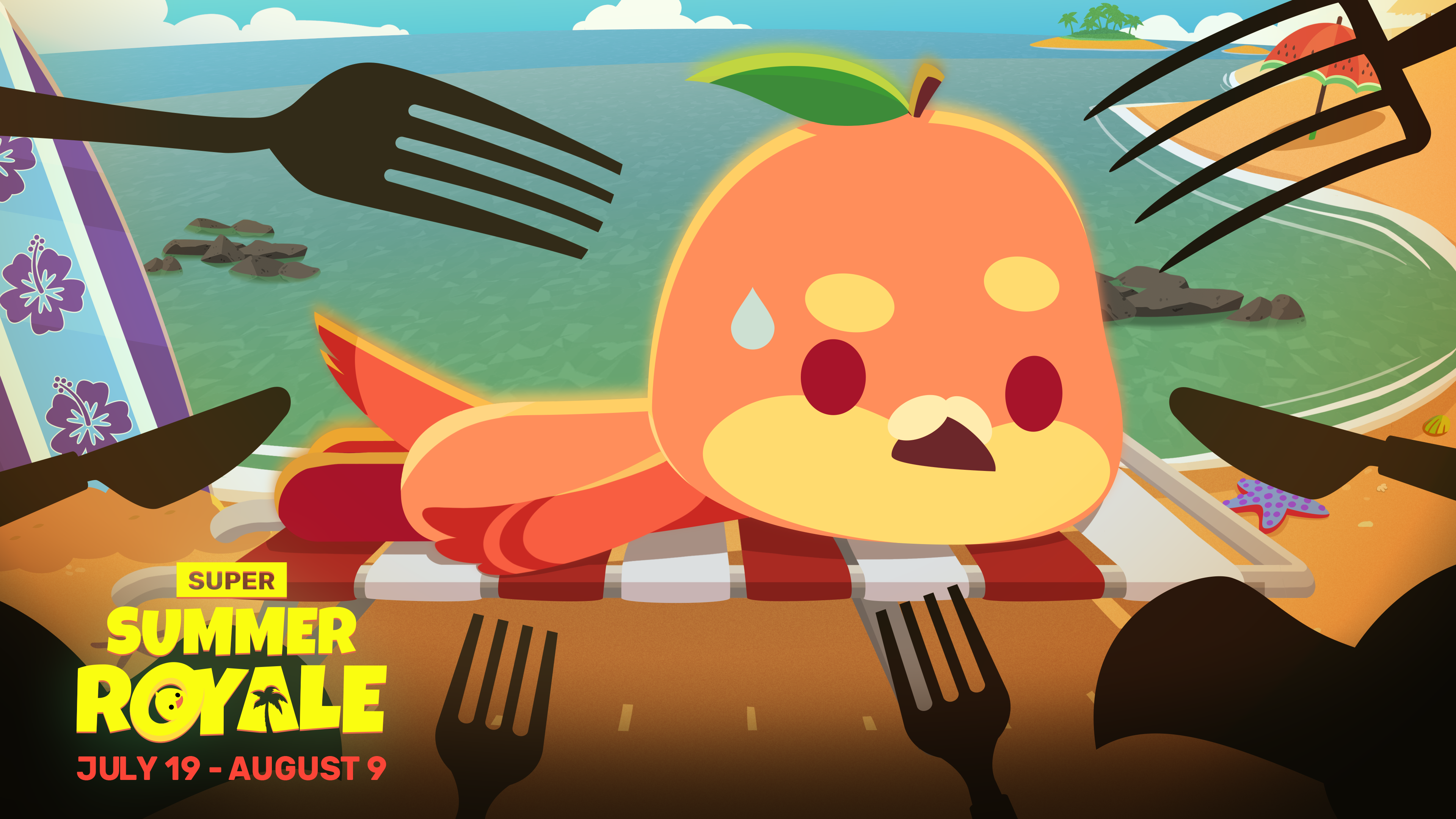 To celebrate summer, two new breeds of Super Animal have been cultivated and freshly picked for some shoreside carnage. They can be unlocked like any other breed in the Research Lab once you’ve unlocked their base species and will not be limited to the Super Summer Royale Event! 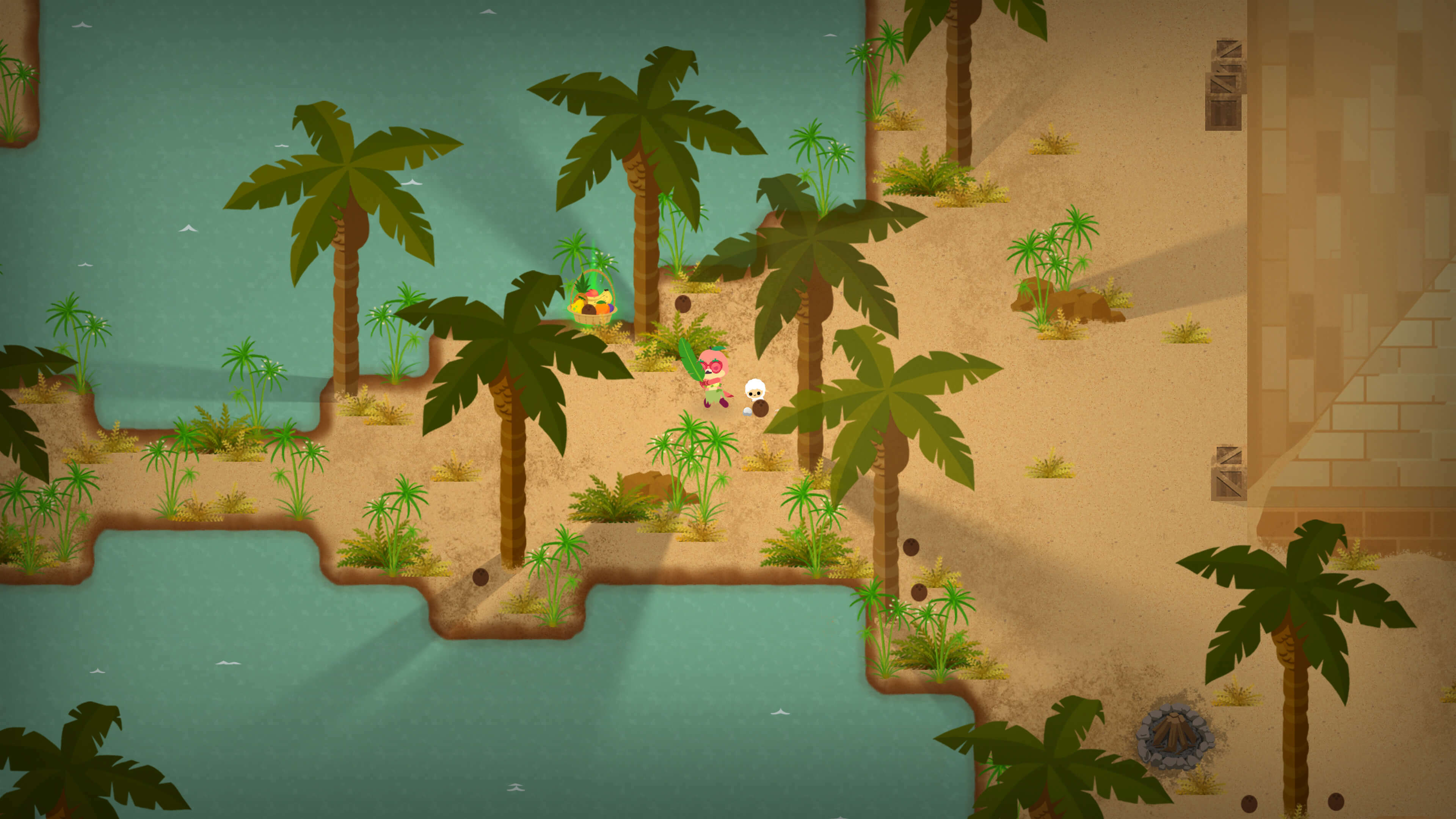 The Super Peach Pigeon is a new breed of Super Pigeon, complete with a cute little stem and a thirst for battle. One thing’s for sure, it doesn’t bruise easy. 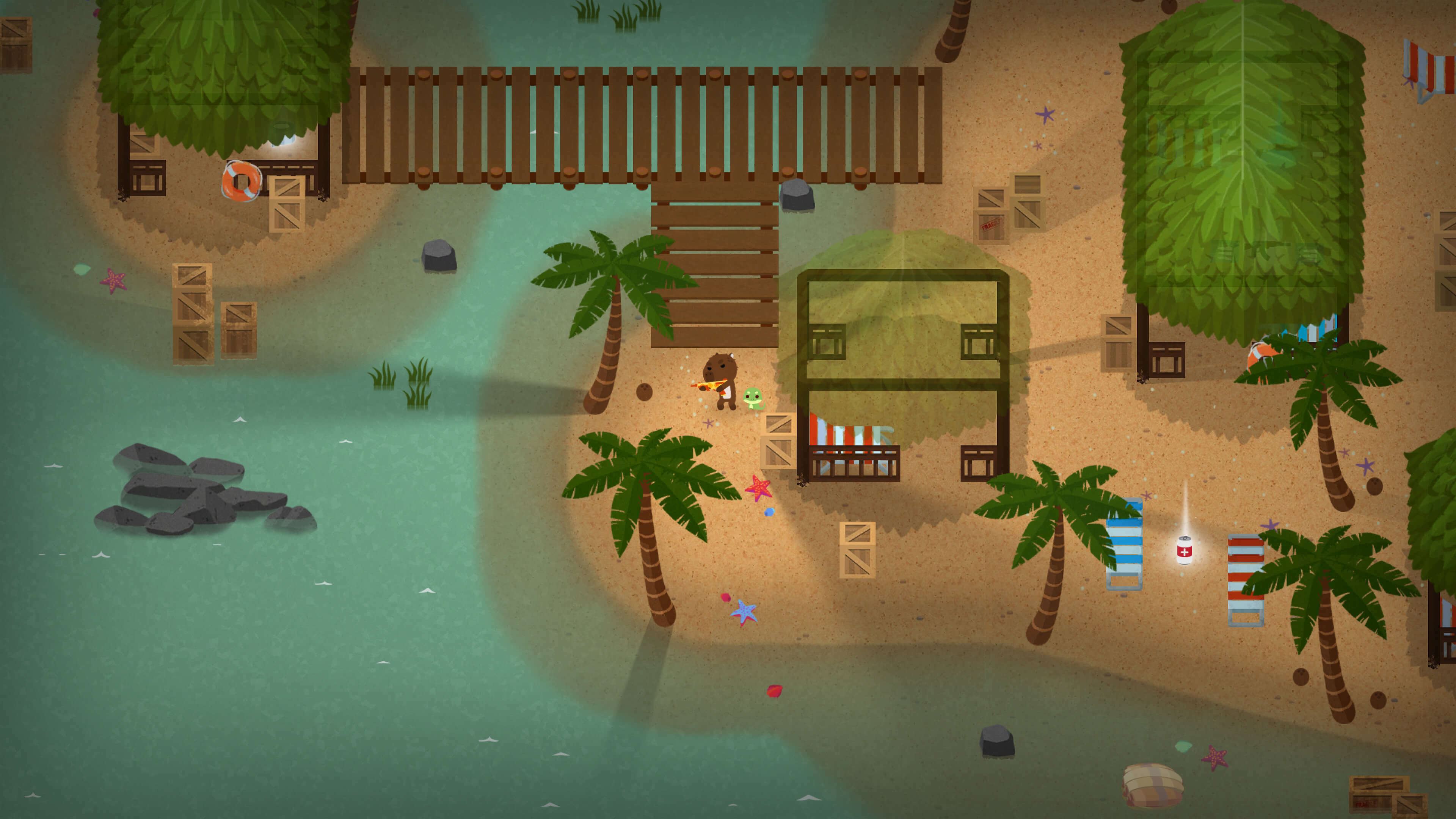 Pulling up right behind it is the highly-requested Super Coconut Capybara, and it’s one tough nut to crack. Unlike the coconuts littering the beaches of the island, this coco critter can and will raise some major shell. 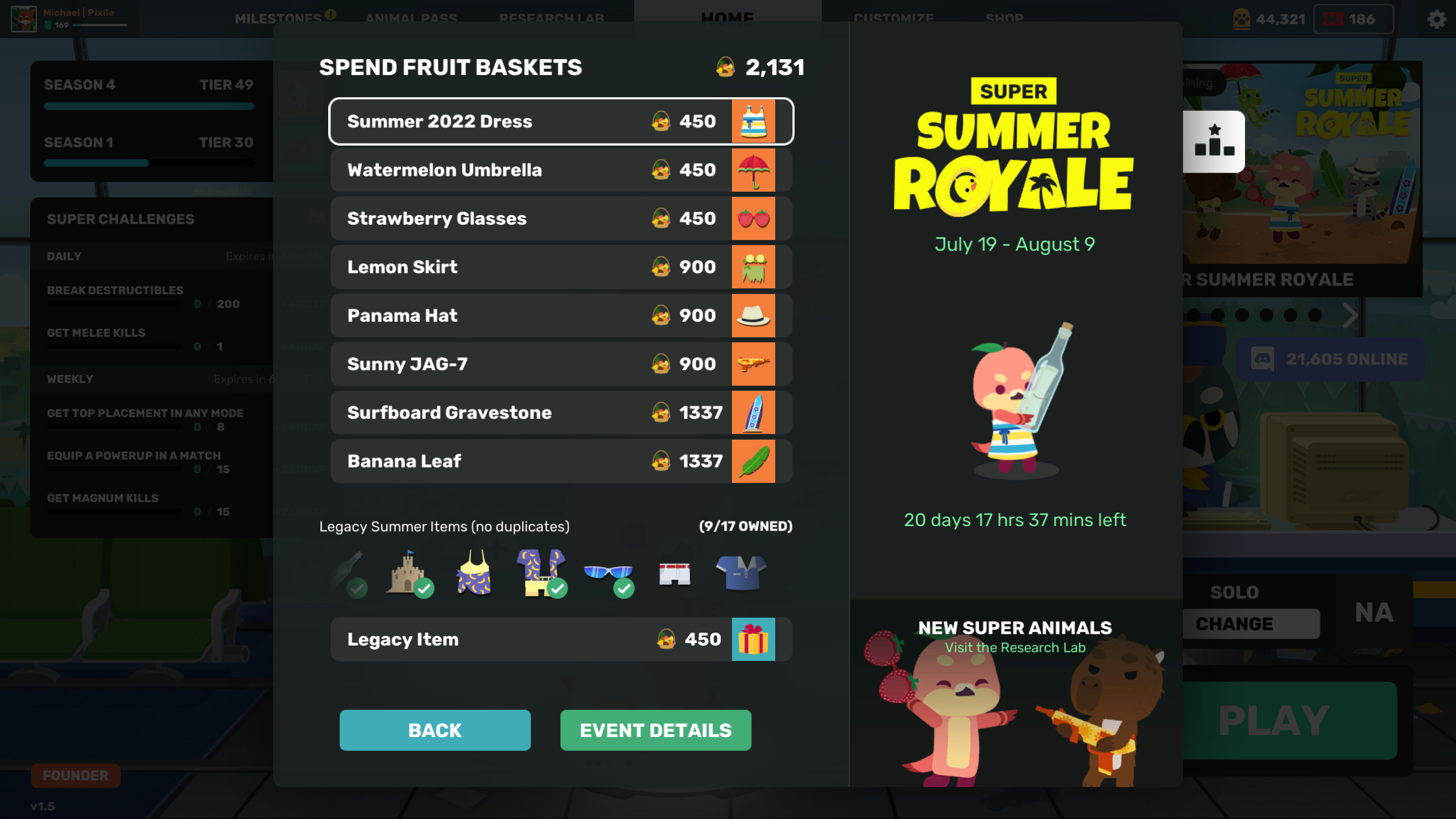 Super Summer Royale this year works the same way as you’re used to from previous years: you can purchase event cosmetics in the in-game store using the event’s limited time currency, fruit baskets. These baskets can be gathered in a match both by picking them up (also netting a small heal) and also by simply completing matches. Be sure to slather on some Super sunblock, because it’s time to go basket hunting again!

Here’s what’s new for 2022 that you can look forward to redeeming your baskets for:

You can also redeem fruit baskets for 17 legacy items from previous summers:

Additionally, some Super Summer Royale cosmetics from previous years have been added to Cackling Carl’s Cart: 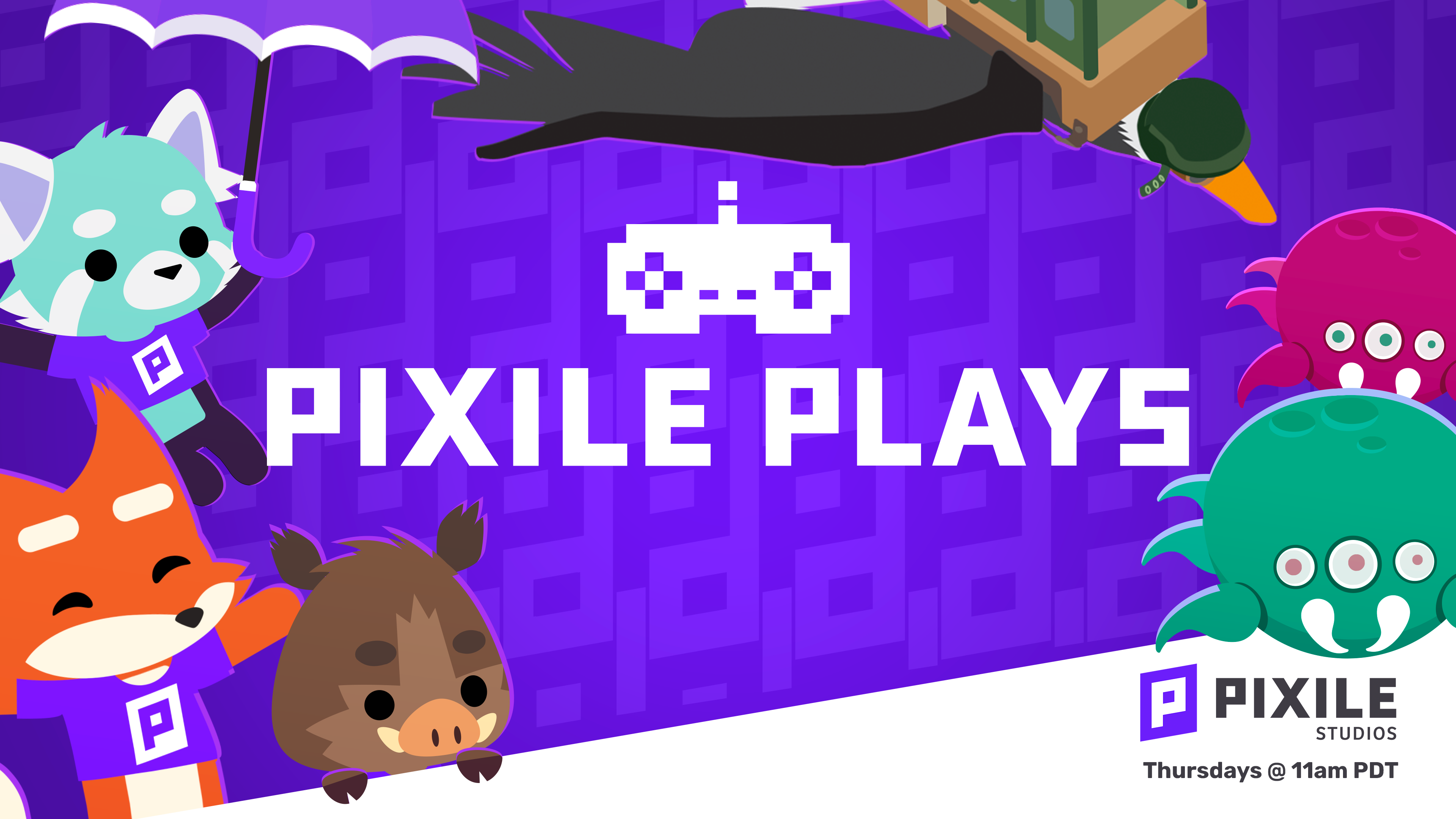 [www.twitch.tv]We’re excited to announce a new weekly stream series, kicking off this Thursday at 11am PDT, with Jake, Logan and Michael on the Pixile Studios Twitch Channel[www.twitch.tv]!

Pixile Plays is aiming to be a more casual stream where we can hang out and chat with all of you! So be sure to bring your questions about Super Animal Royale and the team behind it.

We’ll be playing Super Animal Royale regularly, including the summer event this week, but we also plan to play non-Pixile games from time to time, providing our perspectives as gamers and game designers. The show will also serve as a place to introduce you to more of the team and what they do on the game, with our rotating 4th chair (which might also welcome non-Pixile guests in the future).

Join us for our debut stream this Thursday, July 21st, live at 11am PDT! Our first guest will be Ruben Grijalva, who you’ll know as the voice of Donk, Howl and many other SAR Tonight characters (as well as writing and producing the show). He’s also the official keeper of lore, writing for the game itself in addition to the show.

That’s all for now, Super Animals, we’ll see you on the island and race you to those fruit baskets!