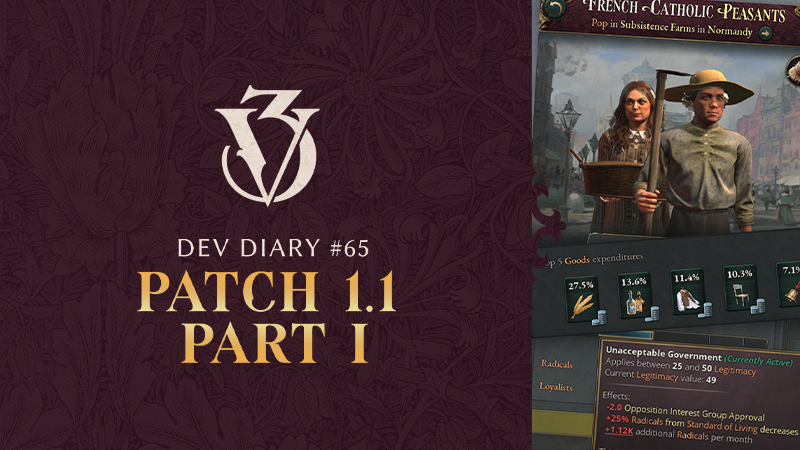 Hello and welcome to the second post-release dev diary for Victoria 3. Today we’ll be talking about the first major post-release patch, which we’re aiming to get to you before the end of the year. This patch (1.1) is going to primarily focus on game polish: bug fixing, balancing, AI improvements and UI/UX work, while the next major free patch (1.2) is going to be more focused towards making progress on the plans we’ve outlined in our Post-Release Plans DD[forum.paradoxplaza.com] by iterating on systems like warfare and diplomacy. With that said, there’s a few more significant changes coming in 1.1 as well, which we’re going to go over in this and next week’s dev diary.

The first of these changes is a rework of the interface for individual Pops, with a particular emphasis on improving the visualization of Pop Needs. In addition to the general overview, there are now separate tabs for Economy and Consumption, with Economy showing a more detailed breakdown of the Pop’s income and expenditure, as well as their top 5 Goods expenditures, and the Consumption tab showing a detailed breakdown of all their Goods expenditures, along with pricing information for the State and Market. We also plan to iterate on Pop Needs further in the future to give you a better idea of what your population needs are country-wide. 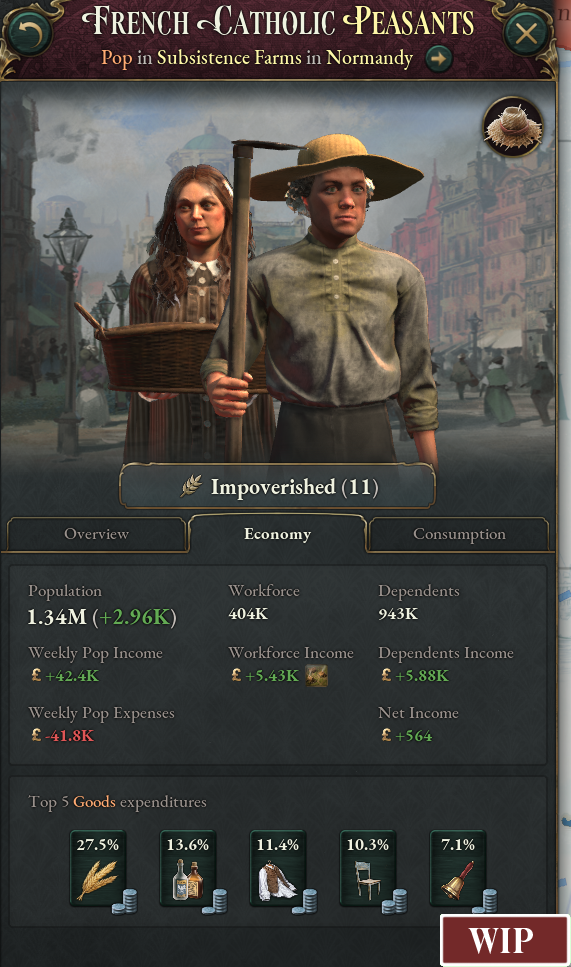 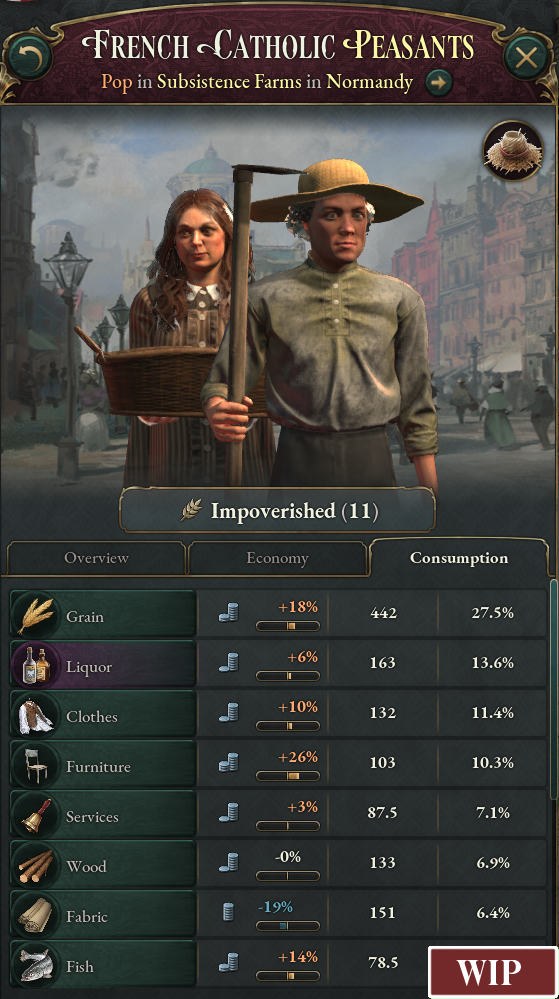 The next significant change in 1.1 is a rework of Legitimacy: some frequent criticisms we have received about the political system in Victoria 3 is that Legitimacy doesn’t matter enough and isn’t clear enough about its effects, as well as that elections don’t have enough of an impact. This rework aims to resolve all those problems by making several changes: First, legitimacy, while still a number from 0 to 100, is now divided into five categories with differing effects, some of which will increase or decrease based on the actual number and not just the threshold:

The way you gain legitimacy has also been altered in democracies, with the share of votes (rather than just clout) represented in Government now having a direct effect on Legitimacy, the degree to which depends on the laws – under more restrictive voting systems, Clout can still be more important than votes, but as more of the population becomes enfranchised votes grow in importance and under Universal Suffrage it should be virtually impossible for a government that doesn’t have the voters behind it to be considered legitimate.

Despite being the largest party in terms of Clout, the Whigs alone are not considered Legitimate due to only commanding 47% of the votes in the last election. 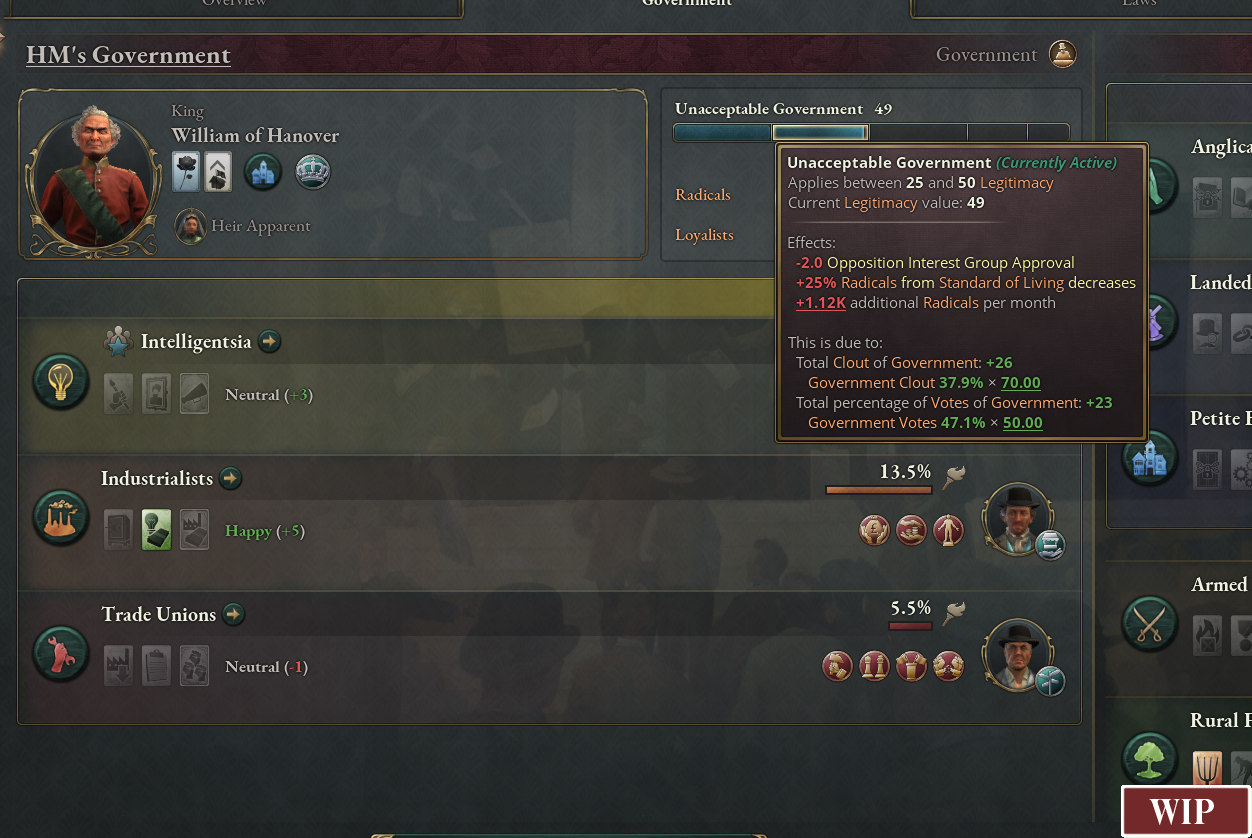 Lastly for today, we’ve also made a balancing change to the Church and State and Citizenship laws – previously, the only balancing consideration for these laws was that less tolerance gave more Authority, which we felt was neither particularly balanced nor really a complete representation of the reasons that a country might want to discriminate against part of their population. To try and address this, we’ve made it so that by default, slightly more radicals are created by Standard of Living decreases than Loyalists from Standard of Living increases, but offset this with modifiers on the more restrictive laws that increase Loyalist and reduce Radical gain among the accepted parts of the population – the more restrictive your cultural/religious tolerance, the greater the effect on the part of the population that actually falls within it.

That’s it for today! Next week we’re going to continue talking about Patch 1.1, which as I said at the beginning of the dev diary is planned to be released before the end of the year. We’re also still working on another hotfix (1.0.6) which should hopefully include some late-game performance improvements and other fixes and which we are aiming to release sometime next week.